Nordic4DFrame always likes to hear how school teachers and educators at museums and science centres are using 4DFrame materials with their classes or visitors. KomTek, a science- and technology-oriented activity centre in Järfalla, Sweden, has shared 11 different activities that not only go along with the school curriculum for grades 1 to 3 and 4 to 6, but are also fun to do.

This exciting new interactive science exhibit - developed jointly by a consortium of museums and science centers around the Baltic - has now opened in Stockholm, where it will be available through January 2014. Besides the touring exhibit, another goal of this project is to create innovative materials for both teaching and learning in association with Helsinki University’s Department of Teacher Education. Nordic4DFrame is a part of this project as it also includes a traveling 4DFrame workshop that focuses on the subject of art in mathematics as a complement to the main exhibit. After January 2014 the exhibit will continue on to science centers in Cesis, Latvia and Tallinn, Estonia. One piece of recent good news is that the exhibit will probably also appear in Finland. This is more than appropriate, because research related to it is based at Helsinki University.

You can find out more about the overall “Discover the Art of Math” project at their web site. (Note this will open in a new window)

Link to “Discover the Art of Math” project

Nordic4DFrame Managing Director Mariana Back has just returned from a week-long study visit to South Korea to, among other things, participate as a judge for the 7th annual ”Creative Math and Science” contest based on using 4DFrame materials. Primary school students from all over Korea come and compete in the challenge of building something they’re assigned in a set amount of time. To win is considered to be a great honor. Mariana also gave several talks to a variety of school and university students in topics ranging from the Nobel Prize, an overview of the Swedish school system, and about how to stimulate creativity. Accompanying her on the trip was her daughter, Annika. (Picture from 4DFrame/Ho Gul Park)

Nordic4DFrame Managing Director Mariana Back is pleased to announce their new and expanded bilingual web site. "Our new co-worker and web editor, Tom Callen, has put a lot of effort into making the site interesting and comprehensive," said Mariana. “For the first time,” she says, “site visitors have the possibility to see pictures, videos – even sample instruction sheets – as well as see examples of the various 4DFrame kits available. Other items include practical information about the company for use by customers as well as some fun things to explore, like a series of Nordic4DFrame desktops.”

Nordic4DFrame participates in “Explore!” - the 9th Hands On! International Conference

This year’s Hands On! Conference (7 to 11 October) was held at three main museum sites in Stockholm: The Swedish Museum of Science and Technology, the National Historical Museum and the Swedish Museum of Natural History. The Conference’s themes of exploring technology, creative learning and the world of exhibitions were covered in over 30 seminars, presentations and workshops. Over 177 delegates from 22 different countries were represented from children’s museums, museums and science centers from around the world.

A one-and-a-half hour long introduction about how 4DFrame is used in classrooms was presented by Nordic4DFrame Managing Director Mariana Back. Held in the Swedish Museum of Science and Technology’s own 4DFrame workshop, it was attended by about 30 curious and enthusiastic international participants as part of the afternoon’s elective activities on 8 October.

Nordic4DFrame speaks at the “Symposium on the Public Understanding of Science”

Nordic4DFrame Managing Director Mariana Back and board member Professor Aadu Ott spoke at the “Symposium on the Public Understanding of Science” held 27 September at the Innovatum Science Center in Trollhättan, Sweden. Mariana spoke about her experiences with informal education while working at Borlänge’s The Future’s Museum, and currently at the Swedish Museum of Science and Technology in Stockholm. She also reported on a co-operative project among countries in the Baltic designed to stimulate student’s interest in math and technology as well as about the use of 4DFrame as an interactive educational tool in such a project.

Aadu Ott’s talk focused on how modern brain research along with information and communications technology fundamentally alters our view of both the form and the content of "scientific literacy." Ott talked about today how we challenge old ideas about learning and instead work to let learning take place under the brain's own terms.

4DFrame honors in Korea and China

National honors continue to come to 4DFrame. Their pre-school program, “Creative Math and Exploring Science,” was recently selected for the Korean national pre-school curriculum by the Institute of Child Care and Education.

What happens when four museums and science centers in Estonia, Latvia and Sweden team up with the Helsinki University Department of Teacher Education? An exciting new touring exhibition, “Discover the Art of Math,” that will tour to their organizations around the Baltic Sea in 2013 and 2014. The goal of this project is to create an interactive science exhibit as well as to produce innovative materials for both teaching and learning. And Nordic4DFrame is a part of this as it includes a 4DFrame workshop that focuses on the subject of art in mathematics as a complement to the main exhibit.

The traveling exhibit will appear at each of the partner organizations on the dates listed below:

- 11 November 2013 through January 2014 at the Swedish Museum of Science and Technology, Stockholm…

You can find out more about the overall “Discover the Art of Math” project at their web site. (Note this will open in a new window)

Link to “Discover the Art of Math” project 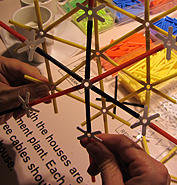 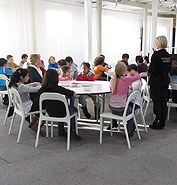 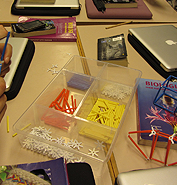