Pictures cannot completely convey what it’s like to actually work with 4DFrame or capture the atmosphere of a 4DFrame event. These videos from various organizations that use 4DFrame will help you get a better understanding of what it’s like to use this exciting educational material.

Here’s a short introduction to some of the components that make up 4DFrame followed by examples of Korean students using this exciting educational material in a variety of different ways:

"Rube Goldberg" display as built by students at the Future of Industrial Science and Technology High School, Korea:

Such demonstrations are named after American cartoonist, sculptor, author, engineer and inventor Rube Goldberg (1883-1970). He was fascinated by complex devices that could perform simple activities in unusual ways. A really fun variation is this innovative creation that is largely built with 4DFrame.

Fun with water wheels at Fredrikshovs Slotts Skola, Sweden. Please note that this clip will direct you to view it directly on YouTube and will open in a new window:

The Swedish scientist, inventor and industrialist Christopher Polhem (1661 - 1751) contributed to many areas of technological advances that have influenced our modern industry. One of the areas he worked on was to develop methods for power transmission. He presented methods for converting power from a power source (eg. wind, water, etc.) to motion, which is then used to perform useful work. He also showed how to transmit power over long distances. This video shows an example using a 4DFrame model that transforms air in motion (here using a fan) to an up-and-down motion in a series of hammers (here built with 4DFrame).

Mr. Ho Gul Park, the inventor of 4DFrame educational materials, shows elementary school children how to build geodesic domes and spheres out of the largest version of 4DFrame. 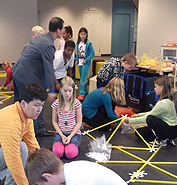 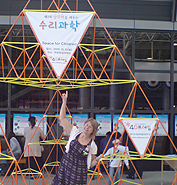 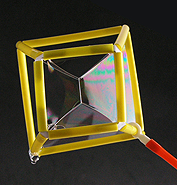 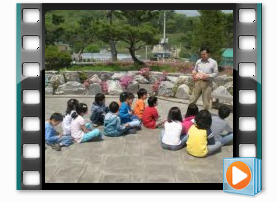